Advantages of Software as a Service

Web based project management software such as Project Drive can also be described as software as a service, or SaaS. Basically, what this means is the software is hosted on the providers servers instead of being downloaded and residing on individual computers.

There are several distinct advantages to using a hosted service, the most important to businesses related to costs. Most software applications are sold on an individual license basis necessitating a separate license, and the associated costs, for each computer on which the software resides.

Then there are the additional costs of having an employee install and maintain the software, including updates which can be frequent in many cases, backing up the data, purchasing hardware, etc.

With SaaS, since it is web based and housed elsewhere, the users pay a small monthly or annual fee based on number of users that is considerably less than purchasing individual licenses. If more users are required, such as may be the case with project management software, they can be added later and be up and running within minutes. The scalability of such software is essentially unlimited.

Another major advantage of web based project management software is that it is accessible anywhere in the world from any computer. All that is needed is access to the Internet.
Posted by Pratik at 1:45 PM 1 comment:

In today’s shrinking world, many companies are doing business all over the globe. Team members based in different time zones working on the same projects can create problems for those responsible for managing the projects. It can be extremely difficult to share information and communicate with all team members in a timely manner. 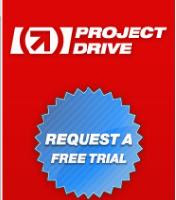 However, web based project management software, such as Project Drive, provides the solution. All team members, regardless of their location, receive real-time updates on the project with the automated communication functions included in the software. Not only does it allow team members to send and exchange comments, but will also distribute emails on major actions. The email function allows:

Posted by Pratik at 6:30 AM No comments: